January 30, 2022
Today's character is for Paolo Greco's Mageblade! He's a pregen from a scenario called "Till a' the seas gang dry, my dear". He's kind of a bad boy love interest from a young adult fantasy novel.
Vicens Thraso, Black sheep (and sorcerer)
I spent too long in the womb. In those fourteen months I swam alongside the drowned ancients, listened to the echoes of their secrets and the sloshing of their rotting innards.
My mother died as I drew my first breath, and I was scorned by my family, but they could not get rid of me, since augurs had blessed my birth. I grew up ignored and often neglected, not that I minded. It gave me time to understand the power I was born with. 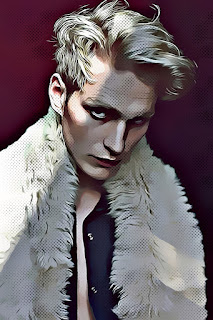 These days I wander the world, scouring libraries and trading with hoary sages for lore. I spent a fortnight among the maggot-men, meditating in the fane of the undergods. I diced with the Archimandrite of Greybrook for access to his tomes. My family pays me a pittance not to come home.
The simple and fearful would call my knowledge forbidden, and my power evil. I will bring the forces of death and doom to heel. Where is the evil in that?
Name: Vicens Thraso
Class/Level: 1st-level Caster
Focus: +3
STR: 6 [-1] Melee: 11
INT: 17 [+2]
WIS: 10 [] Mana: 1
DEX: 13 [+1] Missile: 13
CON: 8 [-] Hit Points: 4
CHA: 13 [+1] Luck: 1
Initiative: +1
Defence: 1
Skill: Research (Int)
Skill: Languages - Esoteric
Perks and abilities
Sensitive: Meditate close to an item to understand whether it is magic and what its properties are.
Maleficence: the caster can channel one mana into a magic attack. It affects either one target, or everybody in a small location. The damage dealt is 1d6 (explodes on a 6) plus Focus. Victims can save to take half damage, usually on dexterity or constitution.
Magic Shield: if the caster or a close ally is subject to a magic attack the caster can spend one mana to shield up to one victim per level from the spell effects, as if they were not subject to its magic
Magic
Disciplines: Diabolism, Necromancy
Spells
Liar's Bolt (Diabolism)
Hell's greatest power lies in deception and  misappropriation. By pointing her finger at a target and speaking the Seven Negations in a commanding tone, the caster may make a living being's existence a lie. The target simply ceases to be, and everyone forgets her existence (a Referee may allow the target's loved ones a Save to remember her).
Targets with fewer hit dice or levels than the caster do not get a save, but those with the same or
more do. Those of twice the caster's level/hit dice are unaffected. The victim resumes existence after
a number of turns equal to the caster's level. There is however the (1-in-6) risk that the target comes
back wrong. Roll another 1d6 to find out how:
1: The target is dead when she re-exists.
2: The target ends up in another world.
3: The target re-exists 1d6 days later than
expected, at the caster's current location.
4. As (3) but the target is changed by infernal
energies. She has twice the number of hit points,
and a +2 to attack and damage, and her physical
form has undergone tragic mutations. She is fully
cognizant of the fact that the caster is to blame for
her misfortune.
5: The target re-exists, but no-one but the caster
recognize her. They consider her a grotesque and
imperfect impostor.
6: The target re-exists, but has aged 3d10 years.
Petition (Diabolism)
Query a creature from another dimension. Answers are not guaranteed to be truthful, and
entities will usually attempt to further their own interests.
If a particular true name is known, it may be intoned during the casting of this spell, and the
named creature will answer.
Conjure (Diabolism)
Call a creature from another dimension. If a particular true name is known, it may be intoned during the casting of this spell, and the named creature will come, but the veil may also be rent without care for what will emerge.
Sorcerers may control any summoned entity of hit dice less than or equal to the sorcerer's level with
concentration, but otherwise the standard reaction roll and negotiating procedures apply.
Life Channel (Necromancy)
The sorcerer transfers life energy, either youth or vigor, from one person to another by touch.
If youth is transferred, the source ages one die worth of years per turn and the recipient regains
one year of youth. If vigor is transferred, the source takes one point of damage and the recipient:
1) regains six hit points but is permanently changed somehow by the dark magic
2-5) regains the number rolled worth of hit points
6) regains 1d6+6 hit points.
Bone Lock (Necromancy)
This simple spell places a ward on up to two doors (or similar demarcations between inside and
outside) which no undead creature may pass. The wards are effective for an hour per caster level.
Nothing stops an undead creature from having a living creature simply open a door for them.
Weapon: Rapier 1d6
Weapon: Knife 1d4
Gear: Bag, blanket, spoon, waterskin, a day of food (sugar bisquits), 3 torches, tinder and flint, family jewelry (worth 50c), 20c in cash, some nigredo; not just good for alchemical purposes, but used as an ointment makes undead believe you are one of them.
31dayscharactercreationchallenge character fantasy Mageblade! magic rpg 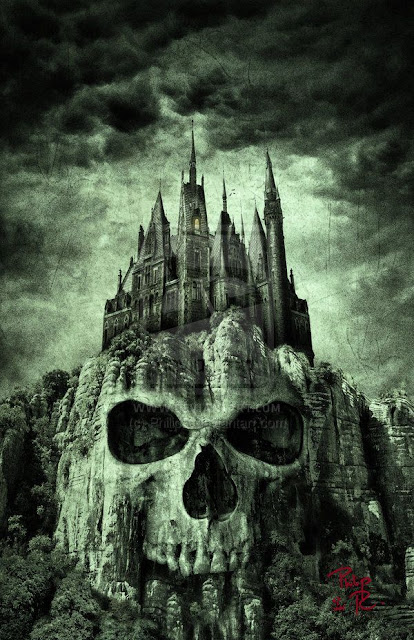 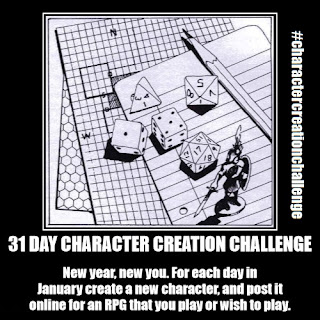 So, this is the first day of the challenge!  Around the campfire sits a disheveled group of people. It's a sorry specimen, that fire. They ran out of wood pretty quickly and resorted to burn the strange debris so common around the foothill. The stuff is grey, light, and quite without use or beauty. When lit on fire it tends to melt, releasing a grey, chemical smoke. The man who is currently in tears from the wafting miasma is Elkvan. Elkvan Murr of the Mudnook Murrs, not that anyone outside that miserable hamlet would recognize the name.  Elkvan had three options when he came of age. Become a mud-farmer like his ma and pa, become an ascetic and take up residence in the large depression that's either a star-crater or a titan's footprint (depending on what kind of ascetic you are). Making off one night with the family's pet eagle Ditmar, Elkvan chose the third option, enlisting with one of the Failed Cities' brave militias. General Selk's Star-Blessed Legion gav
Read more